“May Day is Lei Day in Hawaii.” This phrase is incredibly popular in Hawaii as it is used as a reminder for Lei Day, a state holiday that the island nation of Hawaii celebrates every year on May 1st, instead of celebrating May Day.

Lei Day celebrates Hawaii’s famous fresh flower leis that are used to mark all sorts of celebrations, from school graduations to weddings, and were traditionally used as a sign of peace between tribes.

Lei Day starts on the morning on May 1st and continues throughout the day and into the next day as well; it is one of Hawaii’s most celebrated and popular annual holidays.

How did Lei Day originate?

Lei Day can be traced back to the late 1920s when Don Blanding, a poet and writer, wrote an article for a local newspaper that suggested there should be a day that allows Hawaiians to celebrate the leis that they are famous for. The idea was that the holiday should celebrate the custom of making and wearing a lei to celebrate all sorts of different occasions.

Although Don Blanding came up with the idea of celebrating the lei, it was Grace Tower Warren, another writer, who suggested that the holiday should coincide with May Day. She is also the one who came up with the famous phrase “May Day is Lei Day in Hawaii”, that is still used today.

The first Lei Day was held on May 1st in 1928 in Honolulu, with everyone encouraged to wear leis and take part in the celebrations. In downtown Honolulu, celebrations were held with leis and flowers covering every surface, from felt hats to cars. It was said that the celebrations captured the old spirit of Hawaii – a love of flowers, bright colors, and laughter. The year later, Lei Day was made an official holiday and has been celebrated every year since, with the exception of the years during the Second World War.

How is Lei Day celebrated?

Today, Lei Day is celebrated across Hawaii with the largest Lei Day event being held in Oahu. The celebrations take place in Queen Kapiolani Park in Waikiki, featuring lots of live music, hula dancing, lei making, demonstrations, delicious foods, crafts, and much more. A lei making queen is also crowned to watch over the celebrations.

Across Hawaii, other smaller celebrations are also held, such as in different towns and villages, as well as in schools. These celebrations are similar to the ones held in Oahu but smaller, they still incorporate lei making, music, dancing, food, the crowning of a lei queen and sometimes a lei king as well.

What are the different types of leis?

There are lots of different leis as each of the major Hawaiian islands has its own distinct lei. A lot of people in Hawaii don’t like to say “I love you,” so instead they give a lei to their loved ones, conveying their feelings.

In the main island of Hawaii, a lehua lei is given. This lei is made of the blossoms from a lehua tree, and are normally red, and sometimes yellow, orange or white.

The people of Kauai give a mokihana lei, which is a lei made of purplish berries that are native to the island. These berries are strong and woven with maile, they have a strong smell and stay fresh for longer than more other berries.

In Kaho’olawe, hinahina leis are given. These beautiful leis are made of the hinahina stems and flowers that are silver gray in color and found on the island’s beaches.

The people of Lanai make and give kaunaoa leis. These leis are made from orange-colored strands that are woven together to create bright, beautiful leis.

In Maui, leis are made from the lokelani, a pink rose known as the ‘rose of heaven.’ It has a sweet floral smell and is incredibly delicate.

Those are just a few of the leis that the Hawaiian islands are famous for, there are also many others, including some made from fruit, nuts, and vine, as well as fresh flowers, most often loose orchid blooms. 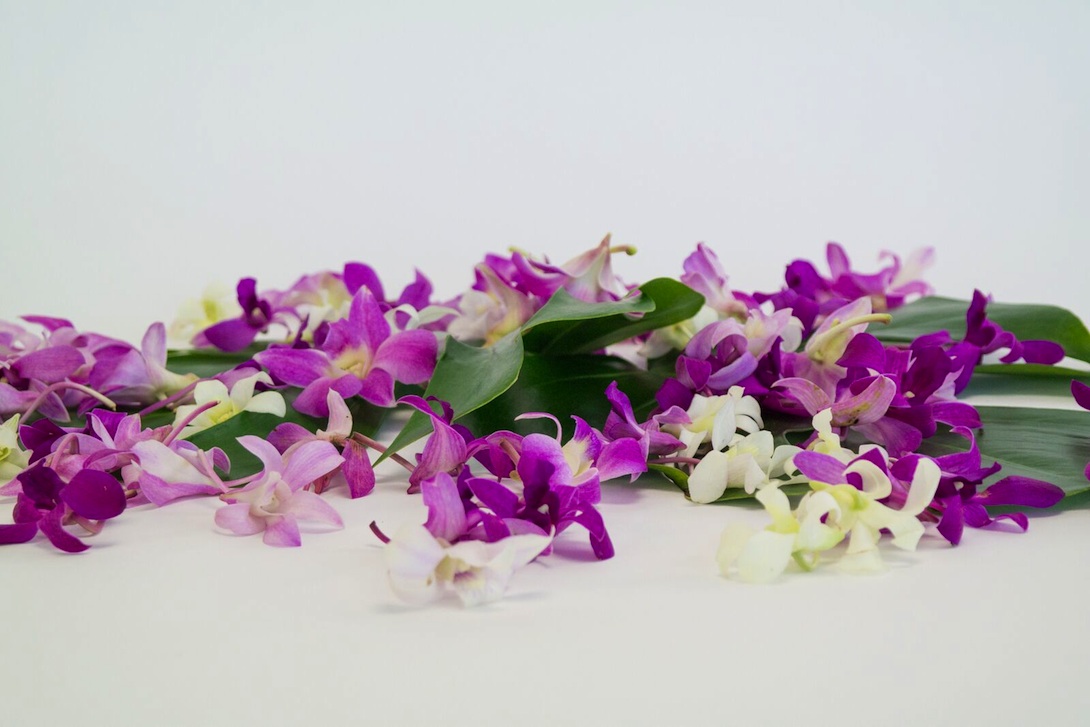 What are the lei giving etiquettes and customs?

In Hawaii, being given a lei as a gift is seen as a great honor, so if you are given one, you must not take it off in the presence of the person who gave it to you, or it’s considered rude. It’s important to thank the person that gave you the lei and show gratitude for it.

Traditionally, the chiefs of tribes on the Hawaiian islands would give leis as a sign of peace and respect to other tribal chiefs. Which is why they are still given to visitors today, as well as being used to mark celebrations like weddings and births.